Last week I posted the results from Part 1 of our survey in which 300+ SaaS companies shared data on their growth and go-to-market strategies. This week I’m sharing the results from Part 2 of the survey where we compare application delivery methods, operational costs and gross margins, contract terms, churn rates, capital requirements and accounting methods.

We’re also very excited to share the forEntrepreneurs SaaS Survey Infographic, which highlights major parts of the SaaS Survey results. With all the data in the survey to help SaaS companies benchmark their growth, we thought it would be useful to show the major insights in a more graphical form.

As this is the 4th annual SaaS survey in partnership with Pacific Crest Securities we’re able to share this year’s results and look at how key metrics have changed over time.  Thanks again to my partners in this effort David Spitz and his team at Pacific Crest Securities (@dspitz and @PacCrestSec, respectively on Twitter). Thank you too, to the forEntrepreneurs readers who took the time to complete the survey! I look forward to hearing your comments below.

How is Your SaaS Application Delivered? We asked participants to provide information on their primary application delivery method (in-house or third-party) and how they expect that to change over the next three years. Over 60% already use 3rd parties predominantly (two-thirds of which is AWS); expectations for the future show little change. Compared with previous surveys, the trend toward using 3rd party public cloud is huge – self-managed is down from 52% last year to 37% this year! This makes sense, as you’ll see below–those in the cloud are generally growing faster and it is no longer more expensive to use a 3rd-party. Compared with previous results, we see a shift away from self-managed at every level. When filtered by company size, smaller respondents reported more frequent use of third-party providers as their primary application delivery method, while the largest companies were more likely to use self-managed servers.

Comparison of Growth Rates for Companies Managing Their Own Servers vs. Using 3rd Parties What Are Your Operational Costs to Deliver the SaaS Application? It is not cheaper to self-host vs hosting through AWS, and hosting through Azure is even cheaper. Respondents relying primarily on self-managed servers reported a median delivery cost of 6% of sales, comparable to those primarily using AWS. The median cost of delivery for respondents on Salesforce1 was considerably higher at 16%. These results are largely consistent with 2014 results.

Operational Costs as a Function of SaaS Application Delivery, Grouped by Size Tiers Somewhat surprisingly, among respondents, a company’s size has little impact on delivery costs as a percentage of revenues. As we saw above, the greater “median” cost of third-party hosted servers was driven up by the use of Salesforce. Interestingly, despite the aforementioned differences in estimated operational costs, median subscription gross margins were much more closely aligned when filtered by SaaS application delivery method. (Azure aberration is likely due to sparse data). The median numbers reflect respondents’ beliefs that the most operating leverage will come from improvements in gross margin, S&M and R&D. This year’s results are very similar results to last year’s survey. EBITDA at scale appears to be very ambitious, and is higher than what we typically see in high growth companies where they are not trying to be profitable too early, and instead are investing in growth. Even the public companies, shown in the chart below, are not delivering those EBITDA margins.

Median Cost Structure by Size (Includes Only Companies with >$2.5MM in ACV) Not surprisingly, companies which spend more on sales & marketing (as a % of revenue) grew at a faster rate than those which spend less. It is interesting to see a step function at 35% growth, and not much increase in sales & marketing spend required for higher growth rates.These are very similar results to last year’s survey.

As I’ve advised in previous posts, companies who have a good LTV (lifetime value) to CAC ratio and can recover their CAC in a reasonable time when compared to the capital they have available, should aggressively go after sales and marketing. With this type of ratio, more spend should result in more customers and a good return, as long as you don’t increase CAC or reduce LTV as you increase spend. 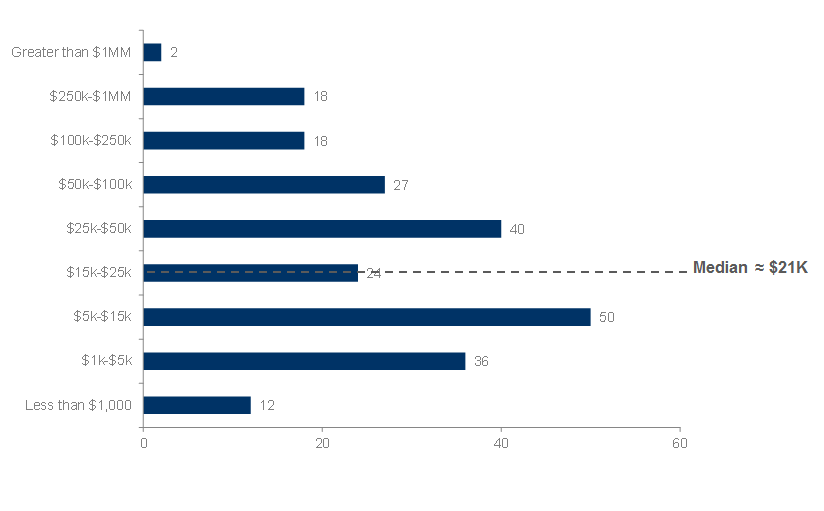 The median average contract length is 1.5 years; and the median billing term is six months in advance. This is essentially the same median contract length as in the 2014 survey, while the group has shown slightly more aggressive (longer forward) billing (median of 6 months vs. 3 months last year). The phenomenon of longer contract terms for larger contracts is pretty clear. Companies in the “elephant hunter” group are booking longer term contracts. 60% of contracts larger than $100K are more than one year in duration. And, respondents with >$250K ACV book 35% of their contracts at 3 years or longer (compared to only 5% in the 2014 group). “What percentage of total ACV on a dollar basis churns in a given year?”(1) Reported median annual unit churn (by customer count) is 10% for the group. This result is slightly higher than the 2014 and 2013 results of 8%. Not surprisingly, companies with very long term contracts (2+ years) have the lowest annual dollar churn. As expected, companies with short-term contracts (<1 year) tend to experience higher churn. Results are consistent with those from last year; the exception being companies using month to month contracts, which show significantly lower churn rates in this year’s survey (8% vs. 13% in the 2014 survey). “How much do you expect your ACV from existing customers to change, including the effect of both churn and upsells?”(1) The median annual net dollar retention rates, including churn, but also including the benefit of upsells, is 104%. The result does not change materially when removing the smallest companies (<$2.5MM in revenue) from the group (likely due to longer contracting). This year’s results are nominally higher than 2014 (103%) and 2013 (101%) and 2 percentage points lower than 2012 (106%). Companies in the survey group have raised a median of roughly $19MM in primary equity capital so far (excluding secondary stock sales). If we exclude companies <$2.5MM, the median jumps up to $32MM.  This year’s results are well above the 2014 and 2013 results of $8MM in raised capital. However, these results are similar to the $23MM in capital raised by participants in the 2012 and survey.

Analysis of Companies by Capital Raised The 2015 respondents have much greater revenue traction per dollars raised than previous years’ groups. However, the relatively low growth rates for companies raising over $50MM, is surprising. Low growth rates seen across all groups are likely pulled down by the law of averages.

This year’s results were very similar to 2014 and 2013 survey results. Approximately 55% of the respondents indicated that they begin recognition very soon (within a week or two) after signing new contracts. It’s interesting to see that many companies with significant services were still able to start subscription revenue recognition quickly. These results are largely unchanged from previous years’ results. The clear majority of respondents offering professional services indicated that they recognize that revenue as the services are provided. We also inquired as to the recognition of sales commission costs. We found two-thirds of respondents indicating that they recognize commission costs up-front. There is a 5% increase in “recognized upfront” from last year’s 67%. The issue with recognizing commission up front is that if you have a very strong quarter, you will be hit with big expenses well before you see the benefit of those revenues. However, this approach does simplify what could be significant accounting complexity that comes into play when tracking deferred recognition of commissions. I hope you found these posts helpful. We’d love to hear your comments below about this year’s survey findings and what data you’d find useful to see next year.

To get results about growth trends and go-to-markets, please read Part 1 of the SaaS Survey. To see a visual summary of the results, see the forEntrepreneurs SaaS Survey Infographic.